Assistance in preparing for a DOT audit. Auditor checklists

Drug Free Business has developed its own proprietary software to manage DOT random pool selections. Customized to the way you want it.

Who are safety-sensitive employees and why are they tested?

Pilots, truck drivers, subway operators, ship captains, pipeline controllers, airline mechanics, locomotive engineers, and bus drivers are just some of the transportation workers that we depend upon to be as clearheaded and as alert as possible at all times. As a safety agency, the DOT can demand nothing less. The use of illegal drugs and misuse of alcohol are not compatible with performing these vital functions. The history of the DOT program began with some fatal accidents that illegal drug use or alcohol misuse helped to cause. Congress passed a law – the Omnibus Transportation Employees Testing Act of 1991 – that requires DOT Agencies to test safety-sensitive transportation workers.

Which employees and types of safety-sensitive duties are subject to DOT drug and alcohol testing? 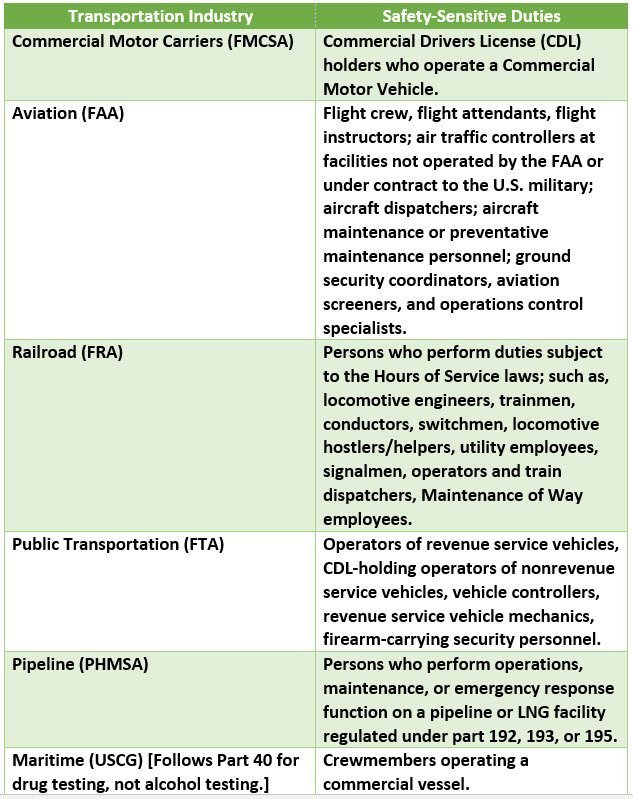 Do I need to have written policies that explain my program?

Yes. The DOT Agencies (Operating Administrations e.g. FMCSA, FAA, etc.) and USCG require employers covered under their regulations to have policies in place that fully explain their drug and alcohol program. Not only must you have policies, but you must also make them available to employees covered under your DOT program.

What is a DER and what does a DER do?

The Designated Employer Representative (DER) is your key employee for many drug and alcohol program functions. The DER must be a company employee. DERs cannot be contractors or service agents. The only exception is when C/TPAs function as DERs for owner-operator truck drivers.

The DER gets test results from the Medical Review Officer (MRO) and Breath Alcohol Technician (BAT) and takes immediate action to remove employees from their safety-sensitive duties when they violate drug and alcohol testing rules, such as test positive or refuse a test. A company may have more than one DER to ensure adequate coverage on all shifts and at all locations, with perhaps a drug and alcohol program manager to coordinate the entire program and assure consistency among DERs. As an employer, you must give your service agents the DER contact information in case they need to speak directly with the DER without delay.

The DER should have knowledge of and authority to make decisions about the testing process and answer questions about it. Again, the primary job of the DER is to ensure the appropriate and timely removal of an employee from safety-sensitive duties.

However, you would need to follow Part 40 and the appropriate DOT Agency and USCG regulations and totally separate your DOT testing from your non-DOT company policy testing. For example, if you conduct DOT and non-DOT tests of an employee following an accident, you must ensure that the DOT urine collection for drugs and DOT test for alcohol are accomplished first. Then you would let the employee know the DOT portion was completed and that you will now be conducting a company policy test. In addition, you must not use the Federal Drug Testing Custody and Control Form (CCF) or the DOT Alcohol Testing Form (ATF) for your non-DOT testing. You would use non-Federal and non-DOT forms.

Drug Free Business will help you set up dual programs for no extra fee.